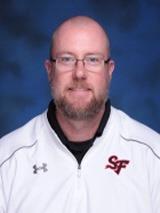 Coach Tim Daniels is a native of Marianna, Florida and a graduate of Marianna High School.  Following high school, he earned an Associate of Arts Degree from Tallahassee Community College before transferring to the University of Alabama where he earned a Bachelor of Science in Secondary Education.  After finishing his degree, Coach Daniels was hired by the Baldwin County Public School System in 1998 and the 2022-2023 school year will mark his 25th year teaching middle school students in Spanish Fort.  He is certified in Biology, Geography, Physical Education, Health, and Driver and Traffic Safety Education.

While at Spanish Fort, Coach Daniels has been recognized for outstanding achievements as a teacher and coach.  During the 2005-2006 school year, he was named Spanish Fort High School's Middle School Teacher of the Year and was also recognized as the Secondary Level Teacher of the Year for the Baldwin County Public School System.  As the sponsor of our Science Bowl Team, his teams won the Alabama Regional Tournament in 2010, 2012, and 2016 allowing Spanish Fort Middle to represent Alabama at the U.S. Department of Energy's National Science Bowl held annually in Washington, D.C.  He also established Spanish Fort Middle's competition MATHCOUNTS program during the 2016-2017 school year which advanced ten students to the Southwest Alabama Chapter Competition, four students to the Alabama State Competition, and ultimately produced one of the four team members who represented Alabama at the National MATHCOUNTS Competition in Orlando, FL in its first year of existence.  As a coach, he is responsible for establishing the middle school football program at Spanish Fort in 2001 and has led middle school teams in Spanish Fort to county championships in boys basketball, girls basketball, football, boys soccer, and boys track.  Coach Daniels received the BCMSAA 1A Football Coach of the Year Award in 2006 and 2007; BCMSAA 1A Boys Basketball Coach of the Year Award in 2000, 2001, 2006, 2007; BCMSAA 2A Boys Basketball Coach of the Year Award in 2019 and 2021; and BCMSAA 2A Boys Track Coach of the Year Award in 2013, 2017, 2018, and 2019.