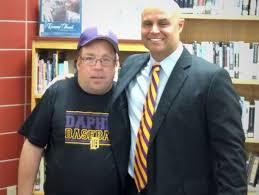 Coach Boyd is a native Texan from Ft. Worth and played his High School baseball at Paschal High School, there he was a four year starter. He then accepted a scholarship to The University of Alabama to play baseball, while there he was a four year starter and earned All-SEC honors and All-Region honors. In 2002 he was the SEC Tournament MVP. In 1999 he was Super Regional MVP when his team beat LSU to go to College World Series.

He stayed at the University as part of the coaching staff and was the hitting coach for two years. His next baseball move would land him in Spanish Fort, Alabama and a part of Coach Walker’s staff and a part of the 2012 State Championship team. He took over the program shortly after the State Championship in 2012 and brought with him the work ethic and dedication that earned him his honors as both a player and coach. In 2013, his first year as the Toro’s head coach they finished second in the state.

He was awarded the All-State coach of the year honors along with the All-County Coach of the year award as well. In 2014 he won his first state championship by defeating the Cullman Bearcats in Montgomery. He sets the bar high for his students and players, but helps them reach their goals by giving them the knowledge necessary to succeed on and off the field. His goal is to have the most intelligent players at each position on the field playing together as a single unit.